If there’s one thing about Susheela Raman that I know is a guarantee is this: you will never, ever,  get a boring performance out of her, thus you’d have to be completely out of it not to be able to photograph a good shot of her.  It’s been about over an hour since I came out from her show halfway (Hey! I have to file the shots out; brother’s got to pay the bills!), and the one thing I kept thinking was “If only other musicians are as giving as she is to photographers!”  And boy, can she sing! I’ve said it before, and I’ll say it again: she has somewhat of a hypnotic voice to enchant the listener that she pulls off when she goes deep into the musical zone.  Here’s a proud Tamilian who’s not afraid (and why should she be?) to vocalise her proud roots. 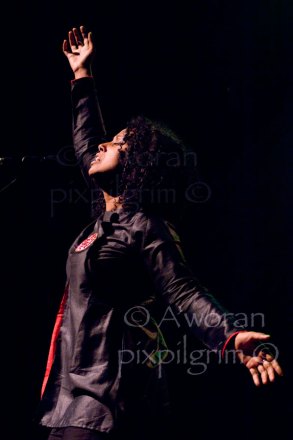 Part of her band had Sam Mills on guitars and Aref on tabla:

in collaboration with the Mian Mir Qawals from Pakistan:

Performing to a packed and sold out Queen Elizabeth Hall, these guys brought their ‘A’ game to the show.  For the whole 15-20 minutes that I covered the show, it was a ‘wow’ for me.  Raghu, if you’re reading this, you’re going to have to pull something special to top this one!

I heard from the missus that Susheela and all the musicians received a standing ovation, and it somewhat turned into a mini-rave during the encore.  Hence the big smile, I guess:

Food for Thought & Soul: ‘I will restore to you the years that the swarming locust has eaten‘. —Joel 2:25