Well, it’s been a couple of very interesting days covering the start of the Alchemy Festival at the Royal Festival Hall celebrating artistry from South Asia, UK and of course, India.  May I just say right off the bat that if it were not for a couple of people namely Anne-Marie, Jenny & Ashanti Omkar, I wouldn’t have had the privilege to have covered the sound rehearsal or the main show of the London Philharmonic Orchestra, under the guidance of Matt Dunkley, performing the first orchestral presentation of some of India’s musical genius AR Rahman’s celebrated work.

From my limited experience covering live music gigs, this much I know: You just can’t fire off frames anytime you want depending on the gig, hence I give anything orchestral a wide berth.  If silence were a golden commodity to sell or buy, many folks would be minting it!  To this day, you’d think Nikon or Canon would come up with silent device incorporated in their cameras to muffle the mirrors!  Anyway, that’s for another blog. In the meantime, the House Rules were simple: Stay at the seat you’re given, no photography during the performance except during the applause, and of course, no flash allowed. Hey! Who am I to argue? I couldn’t get the whole orchestra in any of the frames, so I guess I’m going to have to put in a request to Santa Clause again for a f2.8 300 wide Lens (Just thinking of that lens just makes me drool!). I used a Nikon f2.8 24-70 and Sigma 70-200 and shot at a 1600 iso. Speaking of photography, when the announcer declared at the start of the show ‘No Photography’,  it was like waving a multicolured red flag to bulls! I could hear clicks and flash bulbs going off all over the venue.  It got to a point that the ushers gave up trying to stop people from taking pictures. I’ve said it before and I’ll say it again: Digital has opened a pandora’s box.  I ain’t hating, though. 🙂

For those who couldn’t make the show, the playlist consisted of music from ‘Elizabeth: The Golden Age‘; ‘Warriors of Heaven & Earth‘; ‘Couples Retreat‘; ‘Roja‘; ‘Mangal Pandey‘; ‘Slumdog Millionaire’ (No Jai Ho. Thank God for small mercies!!); ‘Bombay‘ (a personal favourite); ‘Passage‘; ‘Subash Bose’; ‘Meenaxi: Tale of 3 Cities‘; ‘Lagaan‘; ‘Swades‘; ‘Lord of the Rings: Stage musical‘; and the encore was ‘NahiSamne ‘ from the film ‘ Taal‘.

I’ve divided this photo-blog into 2 sections: the main performance yesterday night, and sound rehearsals that took place 2 days ago. Enjoy:

The full Orchestra: (well, everyone I could get in the shot with some of the audience! :-))

AR Rahman came on at the start of the show.  Now, the majority of people actually thought he was going to be conducting the performance, so many were kind of surprised to see AR take his seat in the audience.  You’d think some people would have some self control, but no: hardcore fans actually came up to him during the performance to ask for pictures and what-not! I mean, show some decorum!!

Naveen Kumar was on flute and he is one of the most talented, humble men that I have met! When I grow up, I’m going to be a flutist!

Asad Khan on Sitar and you should really see his rock performance of ‘Masum & Escape.  The dude’s a genius! When I grow up (again!), I’m going to be a Sitarist! 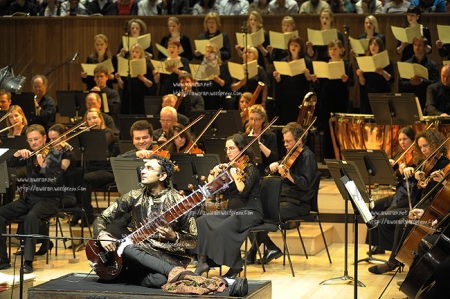 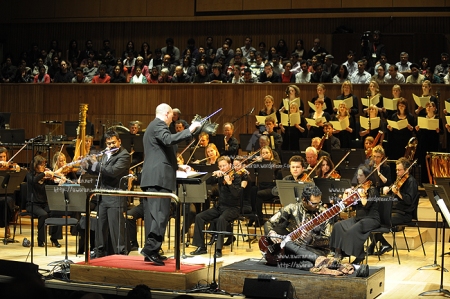 At the end of the show was a Q&A session with AR and BBC Radio One presenter Nihal, who also presented to AR a gold disc from Universal Records celebrating a tally of sales that the music from ‘Slumdog Millionaire’ has sold. 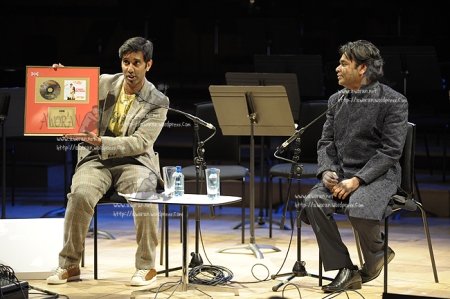 Here’s the second part of the blog: Sound-rehearsals.  Fun and games, people! 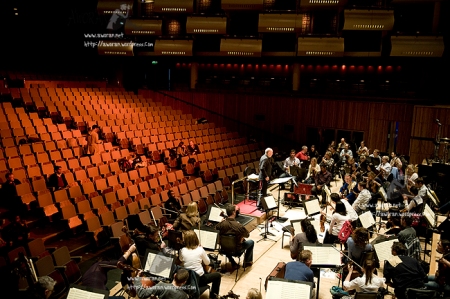 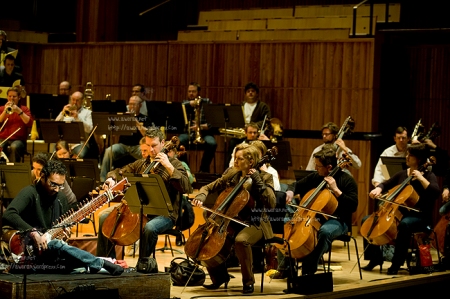 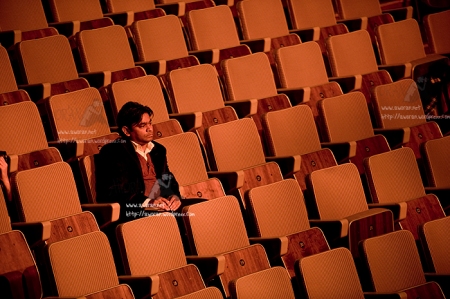 That’s it, people.  Have a great and blessed day.

**All Images are copyrighted to Pixgremlin aworan. That means you should please contact me if you want to use the shot on your web page or such.  Because the pictures come up via google images does not mean that it’s visual All You Can Eat Buffett! I’m not implying that my shots are great, but I know people are going to lift the images (I’m talking to you, BEHIND WOODS!) so please show some respect!**