It’s about 12.38 am on a humid Saturday Morning in lovely Fez. Just got back from an amazing concert, but I’ll come back to that later on.

Anyway, In case you don’t know, I’m in Morocco covering the World Sacred Music Festival. The evening performances will be held at the Bab Makina.  So far everything has been nice, only with the exceptions of when I bought a cup of mint tea that was lukewarm, tasted like Colgate Lite and a was a complete rip-off! That, plus also the apparent rule of non- picture-taking where a Royal is involved.   As is always is the case, the photographer once again is the subject of palaver, even at an event like this. Ok, so I arrived to the venue for the opening concert by Marcel Khalife & his Ensemble, with my photo-pass ready and my gear good to go. I’d already seen a couple of shots lined up in my head started to shoot:

10 minutes into taking pictures of the ‘swank ness’ of this World Heritage Site, I was stopped by group of ‘G-Men’ (Government Men for ye the uninitiated un-paranoid) After a Babel moment of madness by roughly connecting English, French & Arabic, it turns out that taking pictures of the opening night was going to be challenge. This was because Her Royal Highness, Princess Lalla Salma, was coming to officiate the opening night since she is the Patron of the Festival, therefore by some Government/Royal Decree, we could not take pictures of her, unless sanctioned by Said Powers that Be. (By the Great Pix!!  can you imagine that happening with the Monarchy in the UK?) Who am I to mess with protocol? I’m a guest in Morocco, and do I really want to get on the wrong side with a bunch of G-Men who looked like ‘wishing’ for one of us Press types to take the wrong picture and then return the favour by smashing a favourite lens to 1000 pieces? No, I love my equipment. Besides, considering the crowds that were all taking pictures via their mobile devices and small cameras, why not pick on the guys with the pro-looking cameras. I mean, it’s only fair ☺. Suffice to say everyone was on edge, what with the King’s Missus being there, as also some of the top echelon of Government, it was even a miracle that photographers were only given about 5 minutes to shoot by the side of the stage and asked politely in the duel dialects of English & Arabic to take a hike. It’s a damn shame that the same can’t be said of Beyonce gigs whereby you’re given only 90 seconds to shoot her from the pit or way back at the Mixing desk, and she’s not even real Royalty!  I must say, though, that the Princess  is a beautiful looking woman, and while I did sneakily take a shot of Her Majesty, but you’d have more chance of identifying the illusive Loch Ness  from this picture. You be the judge:

Thankfully tonight’s gig ought to be more relaxed, so it’s all good. I honestly believe that this festival is going to be an outstanding and very rich musical week, judging by Monsieur Khalife’s performance playing the Oud (the Arabic Lute),  with the Al Mayadine Ensemble from Lebanon is anything to go. Tonight’s performance was a celebration of feted poet, Mahmoud Darwich, so from the limited time I had, here are a couple of shots: 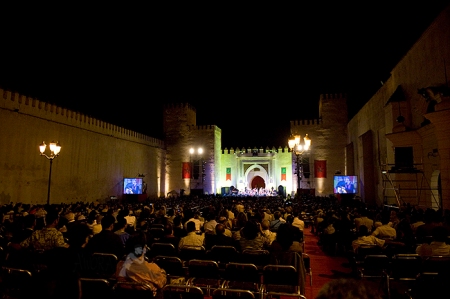